Build feature boxes to go in your left column in Feature Content / Standard in your Site Manager.

Kareem Daniel Elected to McDonald's Board of Directors

CHICAGO, Oct. 3, 2022 /PRNewswire/ -- McDonald's Corporation (NYSE: MCD) today announced that its Board of Directors has elected Kareem Daniel as an independent Director of the Board, effective October 1, 2022. 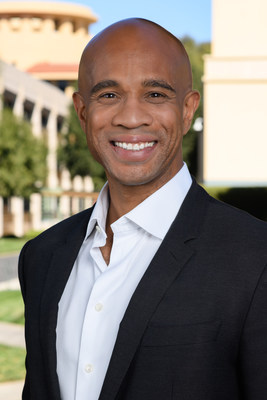 Kareem Daniel Elected to McDonald's Board of Directors

Mr. Daniel currently serves as Chairman, Disney Media and Entertainment Distribution at The Walt Disney Company, where he leads the organization that delivers Disney's storytelling to fans and families around the world. In this role, he is responsible for driving the overall growth and profitability of Disney's global media businesses, including its streaming services – Disney+, ESPN+, Hulu, and Star+ – which combined have more than 220 million subscriptions; its portfolio of linear television channels, including ABC, ESPN, and FX; its ABC owned-stations; theatrical film distribution for Disney's entertainment studios; and Disney's industry-leading advertising sales business.

In more than 15 years at Disney, he has also spearheaded transformation through leadership roles in Consumer Products, Games, and Publishing; Walt Disney Imagineering; the Walt Disney Studios; and Corporate Strategy.

"Kareem is an exceptional leader with a strong track record of building brands that resonate with audiences globally," said Enrique Hernandez, Jr., McDonald's Chairman of the Board. "His dynamic business experience, deep consumer expertise and proven values-based leadership will be hugely additive to our Board of Directors and helping to guide the Company."

"I'm delighted to welcome Kareem to the McDonald's Board of Directors," said Chris Kempczinski, McDonald's President and Chief Executive Officer. "His unparalleled consumer insight and deep experience creating innovative and immersive experiences for customers at one of the world's most iconic consumer companies will greatly benefit McDonald's as we build deeper connections with our customers."

Previously, Mr. Daniel worked in equity research and investment banking at Goldman Sachs, where he specialized in technology, media and entertainment, and telecommunications. He grew up in Chicago, where he attended Morgan Park Academy before earning his Bachelor of Science degree in Electrical Engineering and an MBA from Stanford University.

His election brings the Board to a total of 15 members, who each bring unique experiences, qualifications and skills that provide significant value to McDonald's and its shareholders.

About McDonald's
McDonald's is the world's leading global foodservice retailer with nearly 40,000 locations in over 100 countries. Approximately 95% of McDonald's restaurants worldwide are owned and operated by independent local business owners. 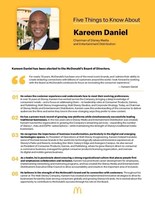